About a month ago, I submitted a sample of my saliva to AncestryDNA to have my DNA analyzed. This morning, I received my results back. My ethnicity estimate breakdown is below with descriptions of each ethnicity from the AncestyDNA website (https://dna.ancestry.com/):

Scandinavia is perched atop northern Europe, its natives referred to throughout history as “North Men.” Separated from the main European continent by the Baltic Sea, the Scandinavians have historically been renowned seafarers. Their adventures brought them into contact with much of the rest of Europe, sometimes as feared raiders and other times as well-traveled merchants and tradesmen.

The history of Great Britain is often told in terms of the invasions with different groups of invaders displacing the native population. The Romans, Anglo-Saxon, Vikings and Normans have all left their mark on Great Britain both politically and culturally. However, the story of Great Britain is far more complex than the traditional view of invaders displacing existing populations. In fact modern studies of British people tend to suggest the earliest populations continued to exist and adapt and absorb the new arrivals.

Ireland is located in the eastern part of the North Atlantic Ocean, directly west of Great Britain. A variety of internal and external influences have shaped Ireland as we know it today. Ireland’s modern cultural remains deeply rooted in the Celtic culture that spread across much of Central Europe and into the British Isles. Along with Wales, Scotland, and a handful of other isolated communities within the British Isles, Ireland remains one of the last holdouts of the ancient Celtic languages that were once spoken throughout much of Western Europe. And though closely tied to Great Britain, both geographically and historically, the Irish have fiercely maintained their unique character through the centuries.

Located in the south of Europe, against the Mediterranean Sea, this region gave rise to some of the most iconic and powerful cultures the Western world has known. The Greeks were first, with their pantheon of gods, legendary heroes, philosophers and artists. They subsequently influenced the Romans, whose vast empire spread its ideas and language across Europe.

The Europe West region is a broad expanse stretching from Amsterdam's sea-level metropolis to the majestic peaks of the Alps. Geographically dominated by France in the west and Germany in the east, it includes several nations with distinct cultural identities. From the boisterous beer gardens of Munich to the sun-soaked vineyards of Bordeaux and the alpine dairy farms of Switzerland, it is a region of charming cultural diversity.

Geography and human history have kept this region perpetually in the spotlight. It sits between Eurasia and Africa and is home to some of the world’s earliest civilizations. It is also the birthplace of three of the world’s major religions—Judaism, Christianity and Islam—with the most holy places of those faiths scattered from Jerusalem to Mecca. Since it was first inhabited, this vital region has been a natural center of learning, trade, culture—and conflict.

The North Africa region includes modern-day Morocco, Algeria, Western Sahara and Libya. These countries, along with Mauritania and Tunisia, are often referred to as the Maghreb. It's an area of stark contrast, with the hospitable Mediterranean coast to the north and the vast, harsh Sahara to the south. In fact, the majority of the population in this region lives within about 50 miles of the Atlantic or Mediterranean coasts.

The Europe East region stretches from the Baltic Sea in the north to the borders of Greece in the south. Throughout history, the region has stood at the crossroads—and often in the crosshairs—of Europe and Central Asia. Despite constant invasions and occupations over the centuries, the hardy inhabitants have, nevertheless, managed to persevere.

The Asia South region includes the modern-day nations of Pakistan, India, Nepal, Bangladesh, Sri Lanka and Bhutan and is home to approximately 20% of the world’s population. The mighty mountain ranges of the Himalaya, Hindu Kush and Karakoram were formed here around 75 million years ago when the floating Indian tectonic plate smashed into southern Asia, giving birth to the world's tallest mountains peaks. These include Mount Everest, known to the Nepalese as “Sagarmatha.”

I grew up knowing that my maternal grandmother was the daughter of German immigrants, and my maternal grandfather was the son of Italian immigrants. My father's side of the family was always far more of a mystery. I grew up knowing that my last name was English and that I had a number of Scottish, Scots-Irish and German ancestors. As a child, I heard many stories of the possibility of a variety of other ethnic groups fitting into our family, including Native Americans and African Americans. The majority of my paternal ancestors arrived in America years before the American Revolution, and as a result, their ethic identities became mixed or lost over time. This test helped to unravel some of the mysteries of my heritage. However, I am eager to compare my results with my father. I believe that this comparison will help to shed further light on the mystery of my paternal ancestors. 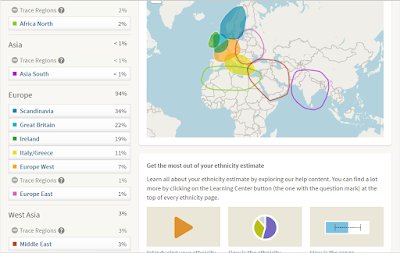