Richie Ashburn's Grave
Gladwyne United Methodist Church Cemetery
316 Righters Mill Road
Gladwyne, PA 19035
If you are a fan of the Philadelphia Phillies, or baseball in general, you have heard the name Richie Ashburn. Don Richard Ashburn was a center fielder for the Phillies from 1948-1959, and later became a long time television and radio commentator for the team in 1963. Ashburn's accomplishments on the baseball field were recognized by the Baseball Hall of Fame when he was inducted into the Hall of Fame in 1995. Ashburn passed away in New York City on September 9, 1997, during a Phillies road trip against the New York Mets. I had the opportunity to pay my respects to Richie this past May. He is buried in the Gladwyne United Methodist Church Cemetery in Gladwyne, PA. His grave is located directly behind the main church building.
Below is a write up on Richie Ashburn from the Baseball Hall of Fame Museum website. I also included some photos I took at Ashburn's grave site of and of his Hall of Fame plaque at the Baseball Hall Fame Museum in Cooperstown, NY.
"A fleet-footed baseball player that used his athletic gifts to get on base and chase down fly balls on the field, then a broadcaster that used his oratory skills to become a much beloved voice off the field, Richie Ashburn would become a fixture on the Philadelphia sports scene for a half century.
Because he played in an era that featured such stalwart center fielders as Willie Mays, Mickey Mantle and Duke Snider, Ashburn was sometimes overlooked by fans of the game. But during a 15-year big league career, the lefty swinging Ashburn twice won the National League batting title, finished second three times, and nine times batted over .300. A lifetime .308 hitter, his 1,198 walks and 2,574 hits helped him finish with a .397 on-base percentage.
'Ashburn is the fastest man I’ve ever seen getting down to first base,' said Brooklyn Dodgers manager Leo Durocher in 1948. 'He’s even faster than Pete Reiser in his prime. Anybody who’s faster than Ashburn isn’t running. He’s flying.'
Short and slight, the 5-foot-10, 170 pound Ashburn excelled from 1948 to 1959 as the prototypical leadoff hitter and center fielder with the Phillies. In possession of an excellent eye at the plate, he led the league in walks on four separate occasions and his 1958 season marked the first time a leadoff hitter paced the league in both batting average and bases on balls. Defensively, Ashburn set outfield marks with nine years of 400 or more putouts and four years with 500 or more.
'Richie was very serious when it came to playing the game,' said longtime Phillies teammate and Hall of Fame pitcher Robin Roberts. 'He would play cards and was a fun guy off the field, but on the field he really teed it up.'
'The only complaint I have about him is he wasn’t tall enough to catch the balls that went into the seats,' he joked. 'He caught everything else.'
After spending two seasons (1960-61) with the Chicago Cubs, Ashburn ended his playing career as a member of the expansion New York Mets for their inaugural 1962 season. Despite hitting .306 and being the lone All-Star representative for a team that lost a record 120 games, he become one of the few regulars to ever retire following a season in which they batted at least .300.
Though he left the field of play, Ashburn soon began a second career when he returned to Philadelphia as a member of the media. He joined the Phillies’ television-radio broadcasting team in 1963, where he would combine perceptive commentary with a wry sense of humor for 35 years."
(http://baseballhall.org/hof/ashburn-richie)
MW 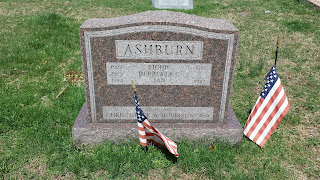 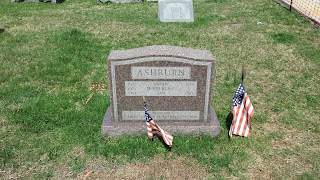 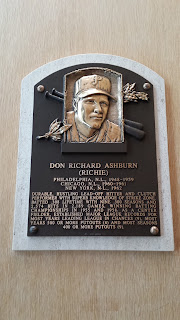 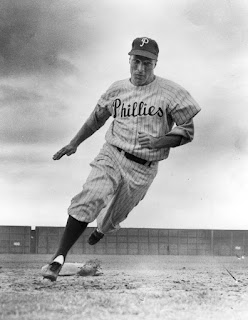