Following the battles of Trenton and Princeton, a guerilla war raged on in New Jersey between militia troops supported by the Continental Army, and British and German forces. Some historians refer to this guerilla war as the Forage War. With the main body of the Continental Army in winter quarters at Morristown, many American operations were planned and conducted out of forward outposts such as Bound Brook. British commanders took notice of this, and in March 1777 Hessian Jäger officer Johann von Ewald developed a plan to launch an attack on the American outpost of Bound Brook. This outpost was commanded by Continental Army General Benjamin Lincoln. In the April 13, 1777 battle, the Continental Army was surprised by attacking British forces. American commander Benjamin Lincoln narrowly avoided capture, along with the bulk of his 500 man garrison. British forces under the command of General Charles Cornwallis proceeded to loot and destroy the garrison. British forces were able to capture cannons, ammunition and supplies from Bound Brook before returning to New Brunswick. American forces under General Nathanael Greene were immediately sent by George Washington to reoccupy Bound Brook. Greene sent troops to harass the British rear guard as they approached Raritan Landing. American casualty reports from the battle vary from 40-120. British casualties in the battle numbered no more than ten.

Near Queen's Bridge in South Bound Brook, NJ there is a sign with two interpretive plaques commemorating the April 13, 1777 Battle of Bound Brook. If you plan on visiting this site, be advised that the best place to park is the nearby municipal parking lot. There is very little to no room to park on the side of the road near the markers and bridge. The walk from the municipal parking lot to the markers and bridge will take no more than five minutes.

Below is a link to the New Jersey Skylands website where you can read more about the Battle of Bound Brook. I also included a few photos I took of the sign and commemorative plaques during my recent visit: 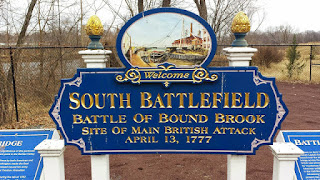 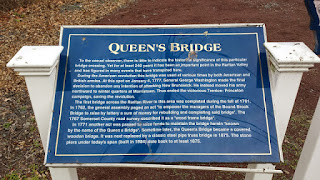 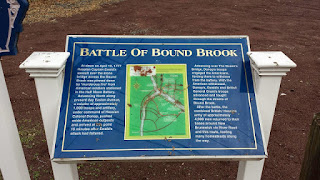 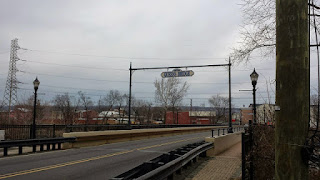 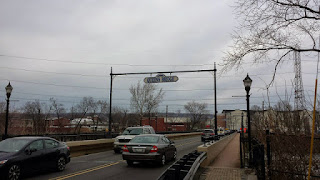 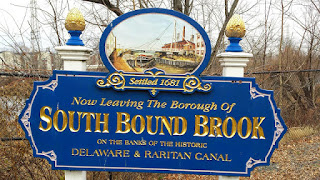