Timothy Matlack was a New Jersey born Pennsylvania Patriot during the American Revolution. Matlack was a controversial figure in Pennsylvania over the span of his adulthood. He enjoyed gambling, horseracing and cock fighting. After falling into debt, he was thrown into debtor's prison. The Quakers secured his release from prison, only to disown him after he failed to reform. Matlack's "hobbies" provided him with the opportunity to interact and socialize with people of all classes. These interactions would later serve him well as he proved to be a skilled organizer of men in his home colony and state.

Matlack served in a variety of positions during America's struggle for independence, to include clerk to the secretary of the Second Continental Congress, storekeeper of military supplies, delegate to the Pennsylvania Constitutional Convention, member of the state Council of Safety and militia officer. Matlack fought in the Battle of the Assunpink Creek (the Second Battle of Trenton) and the Battle of Princeton. Matlack is best known for his fine penmanship, and is believed to be the individual who inscribed the Declaration of Independence on parchment. Matlack passed away at age 93 in Holmesburg, PA. He is buried at the Wetherills Cemetery (aka Free Quaker Cemetery) in Audubon, PA.

"When Philadelphia's radical leaders organized their committees for resistance to British imperial policy in 1774, only one of them intended to instigate a revolution: former Quaker Timothy Matlack. Fiercely opposed to the conservative leadership of John Dickinson and the Pennsylvania Assembly, Matlack, a merchant and brewer turned revolutionary, served on the extra legal Council of Public Safety. A committed political and social radical, Matlack kept regular company with people from the 'poorer sorts.' In an era when wealthy Pennsylvanians worked hard to display refined cultural profiles, supported by goods and activities imported from England, Matlack reveled in the popular culture of the colony and its combative, competitive entertainments. For this reason, his ascent to political prominence is all the more interesting.

Born in New Jersey in 1736, Matlack grew up in a Quaker family. In the late 1740s, he moved to Philadelphia, where he developed a penchant for gambling, horseracing, and the lower-class sport of cockfighting. When his business affairs fell into ruin, wealthier Quakers redeemed him from debtor's prison. But Matlack's refusal to reform his ways - and his criticism of those Friends who held slaves - resulted in his disownment from the Society of Friends in 1765.

Matlack's poor record and restless temperament did not make him a good candidate for elective public service, but he took readily to the mechanical and organizational political tasks that all successful revolutions require to remain dynamic and vital. He became a clerk to Charles Thomson, the secretary of the Second Continental Congress. He thrived on committee work in the radical Philadelphia community that constructed a de facto shadow government that prepared to take over in the city and state if the regular provincial government faltered.

Matlack served as a delegate to the Pennsylvania provincial convention that wrote the radical 1776 state constitution, and associated with such confirmed radicals as James Cannon and David Rittenhouse. He also served with Philadelphia's artisan-dominated militia battalion, and saw some military service in New Jersey in late 1776 and early 1777. He became secretary to the powerful unicameral Pennsylvania assembly under the new constitution, and remained in that office until the end of the Revolution. He served in a similar capacity with Pennsylvania's Supreme Executive Council, which filled the function of a governor in more conventional political systems.

Driven from office by conservative enemies at the end of the war, Matlack became a leader of the Free Quakers, a group of disowned Friends who had supported the Revolution in violation of the Quaker Peace Testimony, and resumed his public diatribes against political foes. In 1781, his heckling of Whitehead Humphreys, a conservative member of the Pennsylvania Assembly, resulted in a public fistfight. The vengeful Humphreys subsequently wrote and distributed a poetic broadside that reflected some of the upper class's contempt for Matlack.

'Altho' dear Tim you've rose so great,
From trimming cocks to trim the state;
Yet to a brother, lend an ear,
A moment - tho" in humble sphere . . .
Did you forget in days of yore
When you, like Price, was wretched poor?
But all at once you've raised so high,
Quakers can't safely pass you by!'

Although Matlack returned to public life in the 1790s, mostly in the capacity of a clerk and functionary, he was not as effective in building governments as he was in tearing them down. He spent his final years in rural Philadelphia County, where he died in 1829. He is buried in Audubon, on the Schuylkill River, not far from Valley Forge.

Timothy Matlack's contribution to American independence was critical in mobilizing public support for the patriot cause. Since the eighteenth century, every modern revolution in the western world has depended on actors like him, men of conviction and resilience willing to work on mundane tasks and smaller functions in the service of a greater goal."
(http://explorepahistory.com/hmarker.php?markerId=1-A-156) 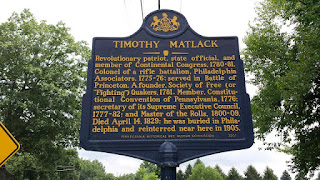 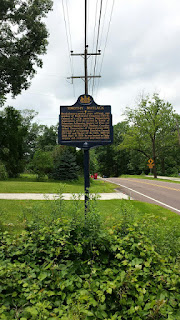 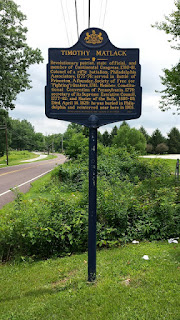 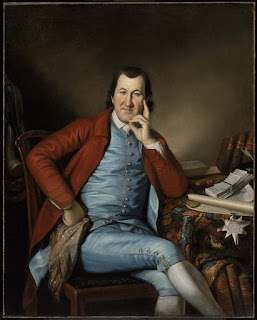