The Van Horne House is one of a handful of historic homes in New Jersey that is associated with the Second Middlebrook Encampment of 1778-1779. The home was also targeted by British troops during the Battle of Bound Brook in 1777. Today, the home sits on top of a large hill, with its back up against a Target store. Across the street to the right is TD Bank Ballpark, the home of the minor league baseball Somerset Patriots. The view of the home from the right field line of the ballpark is phenomenal, and a nice addition to catching a game there. The home is very well preserved, and is definitely a great place to visit if you are interested in the American Revolution.

Below are a couple of write ups on the home from the Crossroads of the American Revolution and Heritage Trail Association sites. I also posted three photos I took during my recent visit:

"Phillip Van Horne, who built this home in 1754, was such a genial entertainer of officers of both armies that his house was known as 'Convivial Hall.' Van Horne’s house was one of General Cornwallis’ objectives in the Battle of Bound Brook. General Benjamin Lincoln was quartered at the home when Cornwallis sent troops looking for him. Lincoln escaped, but the British captured three American cannon on the front lawn as Lincoln’s men retreated. General William Alexander (known as Lord Stirling) used the house as his headquarters during the 1778-1779 Second Middlebrook Encampment."
(http://www.revolutionarynj.org/place/van-horne-house/)

"In 1735, the site was the location of the Janeway and Broughton Store. John Broughton was Bridgewater's first Town Clerk. Philip Van Horne, the house's most famous and colorful owner, purchased the property 19 years later and built his home there. He was a generous and hospitable man who freely entertained both sides of the American Revolution, so much so that a concerned George Washington considered throwing him in a New Brunswick jail for treason. Van Horne's welcoming nature earned his home various nicknames: 'Phil's Hill,' 'Phil's Hall' or 'Convivial Hall.'

During the Revolution, the house served as headquarters for Generals Benjamin Lincoln and William Alexander (Lord Stirling). In April 1777 at the Battle of Bound Brook, Lord Cornwallis' troops marched to the house and skirmished with Patriot troops in hopes of capturing Patriot officers staying at the Van Hornes, but without any luck. General Benjamin Lincoln, who had been at the house escaped into the hills, 'clad only in his breeches,' according to one account.

From the Van Hornes, the house and property subsequently became part of a milling business, a residence for down-in-their-luck union members, and eventually was sold to Calco Chemical Company. The house is listed on the National and New Jersey Register of Historic Houses as a fine example of Corporate Colonial Revival, a tribute to the renovations done by Calco.

In 2002, The Heritage Trail Association moved its headquarters location into the newly renovated Van Horne House and completed entry of the home into the New Jersey Register of Historic places the same year. Today the first floor of the house is exhibit space, a gift shop and meeting rooms (available for rent). The second floor is office space. It is a fine example of adaptive re-use of an historic building." (http://www.heritagetrail.org/van_horne_house.htm) 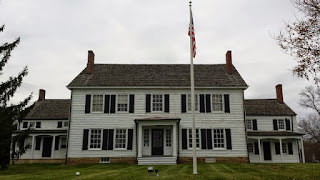 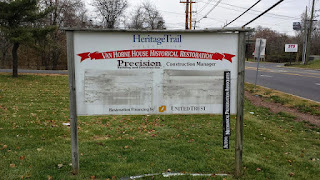 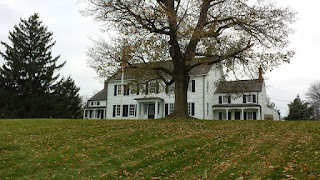