Wilt Chamberlain Stamps from the USPS

The USPS created a commemorative stamp for basketball star and Hall of Famer Wilt Chamberlain. This is a great collector's item, especially for all of you sports history buffs out there!

Here is the write up from the USPS website:

This year, the U.S. Postal Service® celebrates the life of basketball superstar Wilt Chamberlain (1936–1999). On the court, he was a force of nature. The 7-foot-1-inch center dominated the NBA for more than a decade, setting a plethora of individual records. As a pro, he led his teams to two NBA championships, and in 1962 he scored an NBA record 100 points in a single game.

The Wilt Chamberlain stamps are being issued in panes of 18 self-adhesive Forever® stamps. These Forever stamps® will always be equal in value to the current First-Class Mail® one-ounce rate. Art director Antonio Alcalá designed the stamps." (http://uspsstamps.com/stamps/wilt-chamberlain) 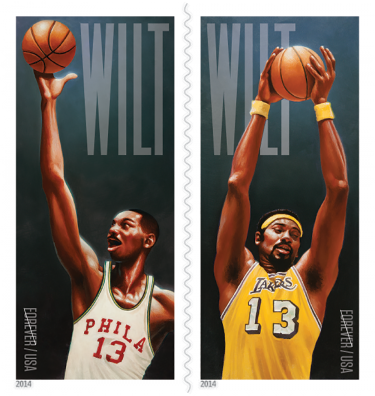